8
News
Home / The Programme / News / In Burkina Faso, groups of local craftsmen from the Boulgou Province get involved to expand the AVN programme 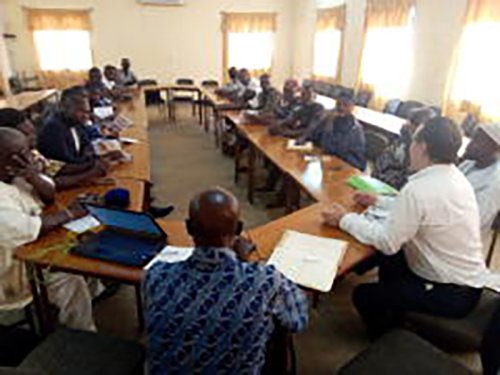 In Burkina Faso, groups of local craftsmen from the Boulgou Province get involved to expand the AVN programme

Following several conversations at the beginning of the year, the Provincial Association of Nong-Taaba Craftsmen and Guilds from the Boulgou Province (APAGAN-B) and AVN came together in Tenkodogo (in the East-Central Region) in April to devise a collaborative plan for AVN’s expansion. All communal representatives for masons’ guilds affiliated with APAGAN-B, along with institutional representatives (such as the regional director for the Department of Youth, Education, and Career Advancement and the regional director of the Assistance Fund for Job Training and Apprenticeship — FAFPA) were in attendance.

They had a productive exchange, which allowed both organizations to better understand the purpose of this collaboration, and to acknowledge its objectives moving forward:

Beyond these goals, APAGAN-B wishes to build a NV prototype at their headquarters in Tenkodogo. They will also support the creation of a few model houses in the town in anticipation of the coming national celebration (December 2019).

Aside from their dialogue, APAGAN-B and AVN met with the mayor and select city councilors to present their collaboration project, with the hope of involving these representatives, or even of inscribing the AVN programme into the city’s development plan.