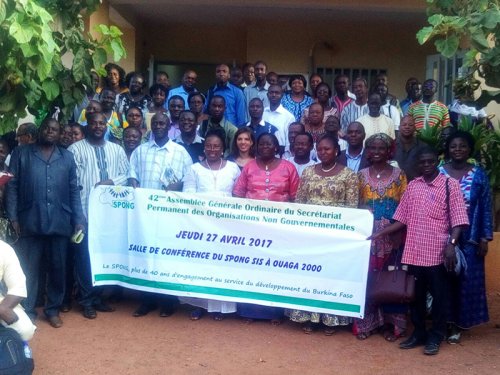 AVN has just been admitted as the latest member of Burkina Faso’s Secrétariat Permanent des Organisations Non Gouvernementales (SPONG). This organisation brings together most of the NGO’s, national and international development agencies, foundations, and R&D centres working in the country. It is also the focal point for the Réseau Sahel Désertification (ReSaD) in Burkina Faso, an initiative of the Centre d’Actions et de Réalisations Internationales (CARI), in which AVN is already involved in France, in the Desertification Working Group.

AVN was admitted during SPONG’s General Assembly in Ouagadougou on April 28th, during which Marjolaine Bert, AVN’s Operational Coordinator for Burkina Faso, Ghana and Bénin presented the Nubian vault programme.

As a major actor in the sustainable housing sector in Burkina Faso, AVN has opted to get actively involved in the SPONG network, whose vision corresponds so well that of AVN: « A strong and dynamic civil society, working in synergy to influence public policies leading to a just, equitable, and democratic society».

Joining SPONG will increase the diffusion and scaling up of the Nubian Vault concept through its adoption by other civil society agencies in the country, following the example of initiatives such as the professional training programme operated by AVN in the Passoré region, executed by AKNGS and financed through the PISSCA fund of the French Embassy.

Membership of SPONG will strengthen AVN’s role in promoting the sustainable housing and construction sector in Burkina Faso, in accordance with the objectives of the President’s National Social and Economic Development Plan 2016-2020, and the Nationally Determined Contributions defined at COP21 in Paris.