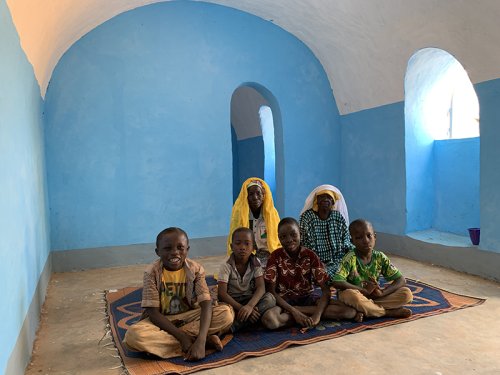 Following the commitments made by the international community at COP21, the Government of Québec, through its Programme de coopération climatique internationale (PCCI), has decided to invest in projects which have positive climate impacts adapted to local contexts.

The project « Build differently with the Nubiuan Vault » supported by Unisféra and the Nubian Vault Association (AVN) since 2017 in Burkina Faso is a relevant and innovatory example. The objectives of this project by 2020 are to build over 900 Nubian Vaults (NV), including over 50 community buildings as well as individual houses, benefitting over 5,000 people, resulting in savings of nearly 20,000 tonnes of greenhouse gases, and the training and employability of 600 NV apprentices and masons.

Beyond the numbers, this project is characterised by AVN’s innovatory implementation approach, in which the local beneficiary populations play a central rôle in deploying a dynamic construction market.

AVN’s experience – almost 20 years of reflection and work in the field - has led to the evolution of its strategy through the increasing mobilisation of lcal development actors (farmers’ organisations, womens’ cooperatives, community organisations etc.). Trained and supported by AVN, these «operational partners» deploy the programme themselves (through awareness raising, training, monitoring etc.) in their own action zones, thus acelerating the mergence and growth of a market for adapted housing in their territories.

This transition toward working through established local partners fits well with the many criteria used by the PCCI in chosing its projects – reinforcement of local capacities, transfer, adaptation and implementation of clean and proven technologies, emergence of market ecosystems – and multiplies the programme’s impacts through the network of local partners.

These impacts concern as much the issues of adaptation – increased resiliance of populations faced with the realities of climate change because of the thermal comfort and durability of NV buildings - – as of attenuation – this « adapted housing » sector is based largely on ancestral techniques and locally sourced materials with a low carbon footprint, allowing for significant domestic energy savings.

More widely, this project meets other essential needs in improving the living conditions of the populations of the Sahel: the employability of young men in rural areas crated through professional training and the increasing demands of the NV market, the strengthening of local economies (local materials and labour, reduced need for imported construction materials), and access to decent housing and basic services (health, education, agriculture etc.) for as many people as possible.

The Government of Québec’s support alllows for : the implementation of a methodology based on the adaptation of an ancient construction technique, deployed by its beneficiaries and meeting a key and often ignored need: decent housing for as many of the people of the Sahel as possible.

This cooperation model for an adapted construction sector, implemented through networks of sponsors, local and international development actors of the green economy, and African decision makers, is unique.